doods of this OC girl who's my main OC.

idk about her backstory, I haven't planned her exact one. A deuteragonist in my co-writer and me's cyberpunk/sci-fantasy storyverse project. Aubrey has electric powers and often makes science (read: mostly Tesla) puns.

I'll draw some more in the morning (timezone's +7 UTC) cause it's 1am right now. reeeeeeeeee

her current design!! Kinda inspo'd the uniform off Paz from MGSV

a profile portrait of her?? drew this like 2ish months ago I was gonna make a webcomic w/ her as one of the protag

something something alkali metals (psst harvelde is my wattpad) 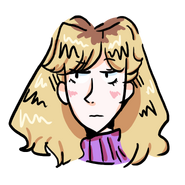 actually have a lot more draws of her but they're Old Art™ from MONTHS ago
Add a photo to this gallery
Retrieved from "https://sketches.fandom.com/wiki/Aubrey_appreciation_page?oldid=5280"
Community content is available under CC-BY-SA unless otherwise noted.