gif versions of the family pic!!! 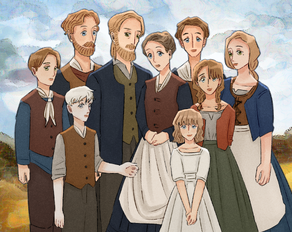 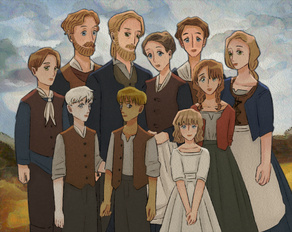 smell the white on them. heres some hcs bc my brain doodoo rn.

first born (23) is the tallest woman on the right. she does manual labour on the farm. p strong. quiet w a good head on her shoulders. she doesnt understand what's different and due to her parents' disgust, becomes uncomfortable around the topic of anwirfell. she isnt necessarily cruel to him just... judgemental.

second born (22) is the tallest man on the left. while helpful on the farm, he is more of the person who takes care of actually selling their produce. more of a merchant. travels to town w dad. hes p intolerant and believes that what's different should just be seperated. regards anwirfell w disdain. close to firstborn. they are both quite soft at heart but he is more of a traditionalist (nice masculinity)

third born (20) is on the furthest right. she mostly does household work. tends to the animals sometimes but doesnt do much fieldwork unlike first born. she's regarded as a beauty in the village but is quite indifferent to suitors due to focus on family. doesnt actually think badly of anwirfell aside from his appearances, just goes w the mood against him of the family. quite passive. close to mother (mama's girl). likes dilwyn bc hes the prettiest boy in the house. she cares abt her appearances quite a lot. sharp and practical realist.

fourth born (18) is the girl in braids. she has low self esteem. tries to help out w her older siblings in their tasks at times but mostly made to mind her younger siblings. interested in books and reading. quite smart actually. is secretly interested in formal education bc of her immediate younger brother. closest to fifth born due to being playmates w him as a child (hes amazing!!). admires him w a tinge of jealousy bc as much as she wants to do what he does as well, shes unable to due to being a girl. easily led into sharing ideas (gaslit lol) w her brother which is what causes her fear and wariness of anwir. generally a kind girl.